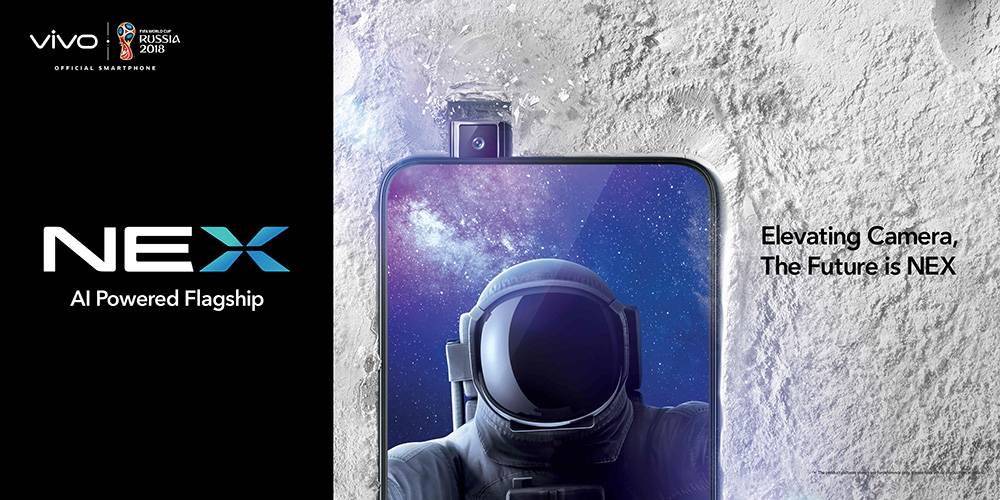 The Vivo Nex is the company’s solution to the world’s demand for a truly bezel-less smartphone. It also happens to be the world’s first smartphone to feature a retractable camera found at the top of the device. The device resembles a lot the concept phone unveiled by the Chinese smartphone manufacturer at the Mobile World Congress back in February, the Vivo Apex. The concept phone was developed according to the dream of many smartphone users, an “all-screen phone”. Most people didn’t expect for a production version of that concept phone to come very early in June when Vivo launched its newest flagship that features a never-before-seen screen-to-body ratio in a smartphone, which is exactly 91.24%.

The screen is pretty big too. The Vivo Nex sports a 6.59-inches Super AMOLED display to go along with a large 4,000mAh battery.

It’s very hard to create a truly bezel-less phone. There’s not yet a technology that allows smartphone manufacturers to design an all-screen phone without having to remove the selfie camera and other sensors usually located at the top of the phone, out of the picture. Many smartphone manufacturers tried to develop phones that have as little bezel as much as they could by creating a notch at the top of the device such as the iPhone X, the OnePlus 6, and the Essential phone.

Vivo, however, thinks of a different way to create an all-screen phone that still happens to have a front camera. Their solution? They designed its 8MP front camera to pop up and down when it is only needed. The primary camera is still located at the back of the phone. It is a dual camera setup with 12MP and 5 MP that claims to produce beautiful and crisp photos that are comparable to its rival flagships.

Another problem that has to be solved when creating an all-screen phone is where to put the speakers. Smartphone speakers are usually located at either the top or at the bottom bezel of the phone. The Vivo Nex, however, features a new technology called Screen SoundCasting. This technology uses vibrations to allow the display to become the speaker. Vivo also claims that this technology will only enhance the sound quality of the phone not found on most smartphones on the market.

The phone also features a fingerprint scanner found inside the display of the device. The Vivo Nex has an in-display sensor which allows you to unlock your phone using your fingerprint very fast.

The Vivo Nex comes in two editions, both with features flagship specifications. The Nex S, the more premium version, is powered by a Qualcomm Snapdragon 845 processor, with plenty of RAM (8GB to be exact) and has 128GB or 256GB of internal storage depending on your preferences. The second edition, Nex A, only comes with 6 GB of RAM, 128 GB of internal storage, and its fingerprint sensor being located at the back instead of inside the display.

The phone is expected to be released soon in China. No actual price has been revealed yet.