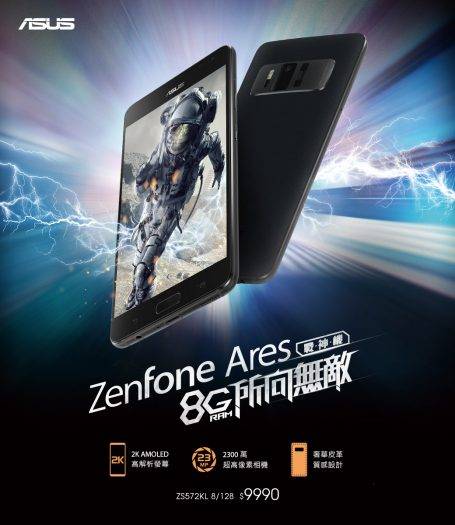 Asus has recently launched its AR and VR focused smartphone dubbed as the “ZenFone Ares”. The new Zenfone Ares is priced around $330 and is currently limited to Taiwan.

The Asus Zenfone Ares was developed with features that focus more on augmented reality and virtual reality. It has features like the SonicMaster 3.0 Hi-Res Audio 384 kHz audio decoder and provides support for DTS headphones with 7.1 channel.

The smartphone has a beautiful5.7-inch display. This is not just your ordinary display, too. It is a Super AMOLED Display that has a standard 16:9 aspect ratio. Hidden inside the phone is a Qualcomm Snapdragon 821 processor and 8GB of RAM. There is also 128GB of internal storage available which can be expanded thanks to a micro SD card slot that supports up to 2TB. The ZenFone Ares also features a fingerprint sensor hidden beneath the home button of the phone.

Asus installed a 23 MP shooter with high-res PixelMaster 3.0 lens at the back of the phone. The camera is rich with features too. It is capable of depth-sensing and motion tracking for the augmented reality. At the front is the 8MP secondary camera with f/2.0 aperture. The Asus ZenFone Ares currently runs on Android 7.0 Nougat which is expected to be updated to Android 8 very soon. The smartphone gets its power from a 3,300mAh battery which can be quickly charged using the Quick Charge 3.0 technology.

There’s no word yet when the smartphone is going to be available outside of Taiwan though.